The How and Why About Gracie's Gowns 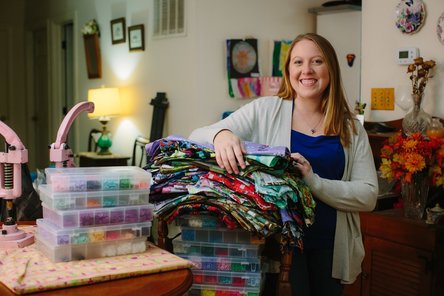 For many years, I wanted to take part in helping families with seriously ill children. More so, I wanted to show each child they truly mattered to someone and in some way help them smile in the darkest of times. I wanted them to know they weren't just room 2034 bed B, the kid with cancer, they weren't just a statistic, or even just one of those kids that spend most of their time in the hospital.

I worked and volunteered in emergency services, medical transports and critical care for pediatrics for a little over 10 years and noticed a lot of the children didn't fit the hospital gowns and spent most of the time without clothing at all because of the sizing, the texture, the cleaning chemicals caused irritation, etc. It really didn't hit me until my youngest was admitted for a concussion and possible seizures after a fall, just what impact a hospital gown would have meant for her. The hospital didn't have any in her size so they let her keep her own clothes on, which was perfect...except they had to do a 24-hour EEG and now she was going to be stuck in that same set of clothes for 3 days time. If they had stayed cleaned, might not have been such a problem, but leave it her that night her EEG was going, she spilled ketchup on herself, but we couldn't take it off without stopping or messing up the EEG...so she stayed in those clothes until the next morning when the EEG was removed and I could give her a bath and change her clothes.

During that time though, I was working on a hospital gown for a friend who was about to deliver her baby and wanted her own gown to wear at the hospital. I was almost jealous I hadn't thought of that myself when I delivered my own children. While making the hospital gown for her, I was reminded of our hospital stay and all the other children there that were essentially naked and thought I needed to make these smaller for children and donate to them. I e-mailed Crystal and asked her what she thought about having hospital gowns for kids who are battling cancer and chronically ill and was told it was a great idea. I asked her because her daughter Grace was my first experience ever with pediatric cancer and I followed her journey daily...Grace passed away in October of 2007 after battling Neuroblastoma and I wanted to honor her and her fight, so with her mother's permission Gracie's Gowns was formed!